I think I’m one of the only people I know who doesn’t LOVE a Sunday lunch. Don’t get me wrong, I’m partial to a roast every now and then, but as a fan of spice I often find a normal roast to be a bit plain and unexciting. A few weekends ago when I was brainstorming what to make for Sunday lunch, I decided to mix things up a little and put together an Indian style affair. Gorgeous, tandoori roast chicken, spiced potato wedges, garlic and coriander flatbreads, kachumba and raitha all on one plate made for the perfect Sunday roast alternative. 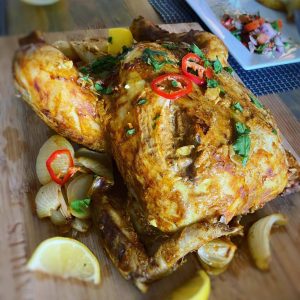 I’ve included the recipes below for the chicken, wedges, kachumba (like an Indian salsa) and raitha. If you are having wedges you may not need a flatbread, or if you like something bready to mop up all the flavour, you could always have a smaller portion of wedges (or even make BNS wedges instead) and balance out the points with the flatbread. I love the WW mini garlic and coriander naan breads and they are an absolute points bargain at just 3sp on all plans. Whichever way you put this dish together, it is bursting with flavour and will provide you with plenty left over chicken for salads/lunches during the week.

When serving this dish to the family, I make sure that I only serve myself skinless breast meat (this is why I urge you to rub some of the marinade under the skin before the chicken goes in the oven – so you don’t miss out on the lovely flavour of the spice mix). Chicken breast is 0sp on BLUE and PURPLE.

Be sure to read through the method for each element of this dish before you start. It’s actually a really easy recipe, it just looks a little more complex because of the ingredients list but most of the ingredients are store cupboard essentials anyway!

I’m on BLUE and I served everything in a naan bread (3sp) with a handful of pomegranate seeds for a little extra juicy flavour. This made the total for my meal 7sp. A bargain in my opinion!

For the spice rub

1 tsp each sugar and black pepper

Pre heat the oven to 200c. Take the raw chicken and using a sharp knife cut a slash into the breasts, thighs and drumsticks. Using your hands, separate some of the skin from the flesh of the breast so you can get in there with the marinade. Make the spice paste by combining all the ingredients together and giving a good stir. Coat the chicken in the marinade (making sure you have lifted the skin of the chicken on the breast and smear the paste on the actual flesh of the chicken too). If you have any marinade left, pop it inside the cavity. Finally pop the lemon that you’ve juiced inside the cavity too. Scatter the onion across the baking tray and then pop the chicken on top, cover with foil and cook for 20 minutes. Reduce the temperature of the oven to 180c and cook for a further 80-90 minutes until the chicken is cooked through and the juices run clear (everyone’s oven temperature varies so the cooking time of the chicken will really depend on the oven and the size of the chicken, one the meat is white and the juices run clear it should be cooked however if you have a meat thermometer you can pop into the thickest part of the breast and the temperature should read at least 75c). Baste the chicken a few times during cooking and remove the lid or foil for the last 15 minutes of cooking (to let the skin brown nicely). Rest the chicken for 15 minutes before you serve. Finally sprinkle with some chopped fresh coriander, fresh chilli and a handful of pomegranate seeds. I serve on a chopping board with a carving knife so people can take whichever part of the bird they fancy.

For the spiced wedges

Serves 6 = 4sp per potion on BLUE and GREEN, 0sp on PURPLE

Pre heat the oven to 180c (I cook the wedges for the last hour I’m cooking the chicken). Pop the wedges onto a hot baking tray in a single layer (don’t let them overlap as they will steam instead of roast). Spray with 1kal, season with salt and black pepper and then roast for 20 minutes. Remove the wedges from the oven. Mix all the spices together and then add to the wedges. Spray again with 1kal and pop back in the oven for 30-40 minutes (until the potato is cooked through and starting to get a little crispy round the edges). Keep an eye on the wedges when they are in the oven as everyone’s oven temperature varies and you don’t want the spices to catch and burn. Equally you don’t want the wedges to be underdone so be sure to taste and make sure they are nice and soft before you remove everything from the oven for the final time.

Mix the cucumber, tomatoes, onion and coriander in a bowl (along with the chilli flakes and cumin seeds if you are having them). Squeeze over the juice of 1 lemon, season with salt and pepper and then pop in the fridge until you are ready to eat.

½ cucumber, grated and water squeezed out

Combine all the ingredients into a bowl. Season with salt and pepper and then pop in the fridge until you are ready to eat.