I was originally going to post this new recipe a little later in the year but after seeing how well my last Korean recipe went down, and knowing a few of you have already bought the gochujung paste, I thought I would bring this recipe forward a little so you could use it up. Well that and it tastes INCREDIBLE so I was too excited to wait to share it with you. 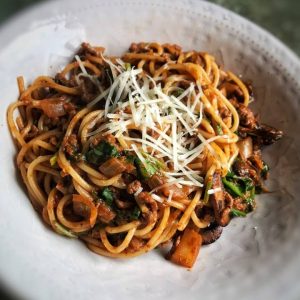 The hubbie and I do love a quick and easy spaghetti bolognese and we are always looking at ways to change it up and make it more exciting. That’s why, after trying and loving my new spice paste, I thought it might be a nice addition to this dish and I have to say, not only is it a nice addition, I’m not sure we will make a bolognese without it again! The addition of a few new ingredients really does take the bolognese to a whole new level and funnily enough, after it has simmered, it doesn’t actually taste too strongly of the paste. Instead the result is the most delicious meaty/beefy and yet tangy dish which tastes so incredibly indulgent, all for a bargain of 5sp/3sp per potion.

I’ve made this a few times and served it with either 50g of normal spaghetti or butternut squash noodles or even 50g of whole grain rice (remember to add the points for the rice or pasta). All have been delicious. I urge you to give this one a go very soon!!

You can buy Korean chilli paste from most Asian supermarkets or you can buy it online (I bought mine from souschef.co.uk) or in Waitrose and Ocado. It has the most amazing flavour;  a little savoury, a little sweet but nice and spicy.

2 punnets of mushrooms, mixture of Chestnut and Shitake, sliced

1 chilli, finely chopped (optional if you like it spicy)

Brown mushrooms in a single layer. Don’t season or shake as this will release water and they will go gooey. If you leave them they will go lovely and brown and nutty. Do in batches then remove from the pan and pop to one side.

In large sauce pan, add the mince and onion, season and brown for 7-8 minutes until cooked through. Add the garlic, peppers and chilli and fry for another few minutes and then add the chilli paste and tomato puree. Stir, simmer for a minute and then add the soy and beef stock with the mushrooms. Bring to a boil then reduce to a simmer. Simmer for 15 minutes. Once reduced and the mixture is not as wet, add the parmesan and spinach, stir and simmer until the spinach has wilted. Season to taste.

Serve with spaghetti and sprinkle with a final flourish of parmesan.