After I made my delicious Foil Baked Cod with Romesco Sauce and Greens recipe, I had a couple of portions of Romesco sauce left over. Whilst I could have used it the next night with chicken or steak, I thought instead I would try and incorporate it into a nice and simple breakfast recipe. This is just that. Low in carbs and points but packed with flavour, this breakfast can be a weekend treat or, since it is so quick to pull together, a weekday option too. 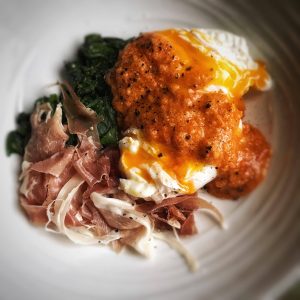 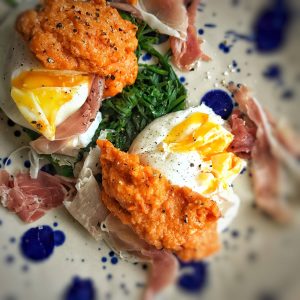 Warm the Romesco for around 1 minute in the microwave (add a little water if it has thickened when cooled too much).

Then add the spinach to a bowl, add a splash of water and cover with cling film. Pop in the microwave for 1-2 minutes until the spinach starts to wilt. Add the butter, let it melt and then toss through the spinach.

Bring a pan of water to a simmer and add the white wine vinegar. Crack one egg into a cup, swirl the water and then add one egg at a time. Poach for 3 minutes until the white is set and the yolk is still nice and runny.

To serve, pop the spinach on the plate, top with the eggs, parma ham and drizzle over the Romesco Sauce. Finish with a twist of salt and black pepper.

For the sauce (note – the sauce makes 4 portions at 3sp per portion, you only need two portions for this recipe, make the whole batch and it can be used for several days after).

Pop all the ingredients for the sauce (except the water) in a blender and wizz to a smooth paste. Add the water as you are going until you get a nice thick but loose consistency. Pop into a pan and warm up and then keep on a low heat while you prepare everything else.