Whilst I was pregnant, one of the things I wasn’t supposed to eat was goat’s cheese. Goat’s cheese is one of my favourite cheeses and 9 months without its creamy delight was hard going so I knew one of the first recipes I would write once I could have it again would include it! I also love the combo of lamb, harissa and goat’s cheese and so, after a bit of experimentation, I came up with this lovely salad which works perfectly as both a healthy, filling evening meal as well as for left overs for lunch the next day.

If you aren’t a fan of lamb you could use chicken instead. This make the recipe 7sp on BLUE, 8sp on GREEN and 4sp on PURPLE. 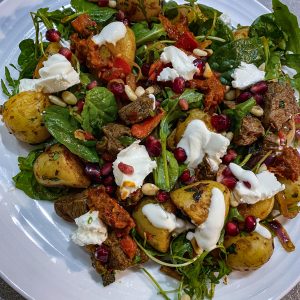 Pop the potatoes in a saucepan, cover with boiling water and add 1 tsp table salt. Boil for 15-18 minutes (or until soft – check by poking with a knife).

Meanwhile take a large frying pan and add the pine nuts. Toast on a medium heat for a few minutes until you smell their nutty aroma and then remove from pan (don’t let them burn!).

In the same frying pan add the diced lamb, season with salt and pepper, add 2 tsp harissa paste and spray with 1kal.  Toss together and then fry on a medium-high heat for 8-10 minutes until the lamb is cooked to your liking. Remove the lamb from the pan to rest (pop to one side in a bowl) and in the same pan add the onion and red peppers, spray with 1kal and fry for 8-12 minutes until the onions are nice and soft (add a little water to the pan if it starts to get a little dry). Add the onions and peppers to the same bowl as the lamb.

Drain the potatoes and add to the frying pan that you fried the lamb, onions and peppers in. Spray with 1kal and add 1 tsp harissa paste. Season with salt and pepper and fry the potatoes on a medium-high heat until they start to take on a little colour.

Pop onto a large plate or into a large bowl and then top with the goats cheese, pomegranate seeds and pine nuts.  Drizzle over the Greek yoghurt and the final tsp of harissa paste (in same dollops) and finish with a final squeeze of lemon juice.