One thing that the hubbie and I never get since I joined Weight Watchers is a Chinese takeaway. They are so loaded with points/calories and its just so easy to make healthy but tasty alternatives, there just doesn’t seem any reason too!

I’ve written a few Chinese Fakeaway recipes over the past few years but this one has been requested many a time and I’ve never got round to reworking it. Well good news…. now I finally have!!

I’ve tested this recipe a few times now and tried a few different cooking methods but this one is my favourite. If you prefer the chicken a little more crispy you can toss the raw chicken in 1 tbsp of corn flour and half the spice mix before the first fry (this will make the dish 5sp per person). You can also cook the chicken coated in half the spice mix and corn flour in the oven for 20-25 mins on 180c (spray with 1kal) and then add to the cooked veggies and continue from there. I like the method I’ve gone with below as it keeps the chicken nice and juicy!!

The use of spinach and lime aren’t a traditional addition but I think the spinach bulks the dish out nicely (if you aren’t going to serve with rice) and the lime adds a lovely freshness at the end.

I served this as it was without any rice but I served the hubbies with a 60g portion of egg fried rice (6sp) for a grand total of 10sp. 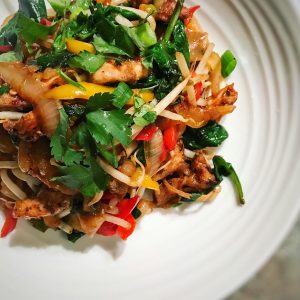 For the spice mix

For the stir fry

Handful of beansprouts and washed spinach

Begin by toasting the salt flakes in a dry frying pan until they start to brown (this will only take a few minutes). Then, in a small bowl mix the toasted salt, ground black pepper, white pepper, 5 spice, sugar, garlic powder and chilli flakes together.

Spray the pan with 1kal again and fry the onion, peppers, spring onions (reserve a few spring onions to dress at the end) and half of the remaining spice mix until the onions start to soften about 5-6 minutes). Once the onions have started to soften add the chicken back to the pan with 1 tsp of sesame oil. Taste and then add more of the spice mix to the pan as required/to taste. Stir fry for a few seconds and then add the soy and honey to the pan. Toss everything together then add the spinach and beansprouts. Stir fry for a few more minutes until the spinach has wilted.

Serve topped with a sprinkle of spring onions and a squeeze of fresh lime juice.