I was watching Saturday kitchen last weekend and watched as one of the chefs made the most delightful looking salad out of julienne celeriac. My mouth was watering as they plated up the dish and it was at that point that it struck me, I don’t think I’ve ever cooked or even tasted celeriac. I decided then and there that I was going to pick some up to start experimenting with it. 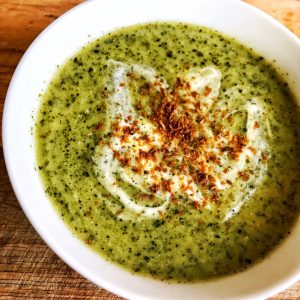 That evening we headed to a lovely cottage in the Peak District and some friends made us the most delightful celeriac mash, what a coincidence I thought! I loved the flavour and texture so I was even more set on experimenting with it in the weeks to come. On returning home and heading to Aldi for a ‘big shop’, I was pleasantly surprised to find these bulbous looking vegetables stocked in abundance so, I picked one up and thought I would start my experimentation with a soup.

Celeriac is actually a brilliant option for a low smart points soup as it’s a huge chunky vegetable so it really bulks out the pan and helps to create lots of soup portions for such a low points value. The taste is delicious too with a subtle celery like flavour. The addition of peppery kale and warming cumin and coriander also really bring this easy soup alive.

1 vegetable stock cube made up with 1.5 litres boiling water

3 tsp each coriander and cumin seeds

Fill the kettle and pop on to boil.

Take a large saucepan, spray with 1kal and add the onion. Fry for 3-4 minutes until it starts to soften (add a little water if the pan starts getting dry) then add the celeriac, garlic and apple and fry for another 3-4 minutes.

Add the stock, bring to a boil and then simmer for 15-20 minutes until the celeriac is nice and soft. Add the kale leaves and submerge in the soup mixture (add up to 200ml extra boiling water if the kale is not totally covered). Simmer for another 5 minutes and then blend using either a food processor or stick blender (I used a big blender and did it in batches).

Pop the soup back into the sauce pan and keep on a low heat.

Toast the cumin and coriander seeds in a small dry frying pan (for 2 minutes until you can smell the lovely toasted scent coming off the seeds) then pop into a pestle and mortar and grind to a powder. Add most of the powder to the soup (I keep a little to sprinkle on top).

Add the butter and 4 tbsps of the crème fraiche to the soup, stir through so it is smooth and creamy and season with salt, black pepper and white pepper to taste.

Serve with a ½ tsp crème fraiche swirled through the soup and a sprinkle of the cumin/coriander mix.