I’ve often got a packet of sausages lurking round in my freezer as I think they are a great ingredient for a speedy and tasty tea. I often defrost and then remove the skins, crumble and use them in pastas or risottos but this week, wanting to make something a little lighter that I could take to work for my lunch, I decided to give a new soup a go. The result was lovely. Pesto and tomato are one of my favourite combinations and whizzed together with sausages, they make for an overall tasty, fresh and summery soup. 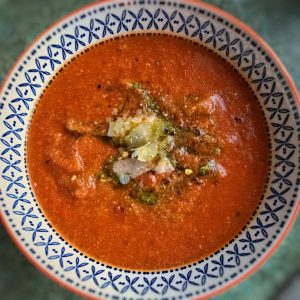 I’ve whizzed the soup together here before adding the beans as I wanted something a bit smoother and wanted the sausage flavour to spread nicely through the soup. If you want something even more rustic, feel free to leave out the blending and leave it nice and chunky.

4 x low fat pork sausages, skinned (I used Sainsbury’s Be Good to Yourself Cumberland Sausages, these are 6sp for 4 sausages)

Take a large saucepan, spray with 1kal and add the sausage meat. Fry on a high heat until the sausage is cooked and starting to brown. Add the red onion, garlic, peppers and balsamic and fry for five minutes until the onions start to soften (add a drop of water if the pan becomes too dry). Add the fresh tomatoes, season and fry for another minute and then add the tin of tomatoes, chicken stock cube and boiling water.

Bring to the boil and then reduce to a simmer for 20 minutes.

Remove from the heat and blitz using a stick blender (or food processor).

Once relatively smooth, add the beans, pesto, paprika, oregano and crushed chillies. Stir and simmer for another 10 minutes. Season to taste adding more crushed chillies if you fancy.