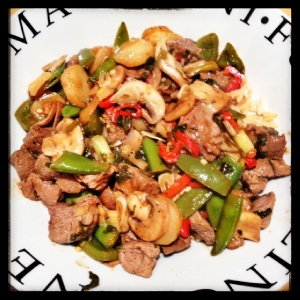 This was a recipe made for me by my lovely best mate’s OH and it was so nice I bought the recipe book to make myself a smart point friendly version. It’s from Jaime’s Ministry of Food (original recipe here) and comes in at a very reasonable 12sp each. It’s a nice change to have a different stir fry sauce like black bean and the addition of rice instead of noodles makes another welcome change! 1 small bunch fresh coriander, leaves put to one side and stalks finely chopped

The man himself Jaime Oliver advises that this recipe works best with rice that has been made earlier, cooled, and then chilled in the fridge so great for leftovers but as I made it from scratch I followed his instructions to cook the rice and then spread it out on a tray in a thin layer and pop it in the fridge so that it cools down quickly while you’re cooking the rest of the dish. So to begin…

Bring a pan of salted water to the boil, add your rice and cook according to the packet instructions. Drain the rice in a sieve, run it under a cold tap to cool, and then allow to dry out in the fridge.

Then grab a big bowl and put in the red and yellow peppers, mushrooms, mange tout, ginger, garlic, chilli, spring onions, coriander stalks and steak strips (you can also add water chestnuts at this point too if you fancy them for 0pp!). Add the sesame oil and mix everything together.

Then, preheat a wok or large frying pan on a high heat and once it’s very, very hot add half of the groundnut oil and swirl it around. Add all your chopped ingredients from the bowl. Give the pan a really good shake to mix everything around quickly. Stir fry for 2 minutes, and keep stirring so it doesn’t burn and stick to the pan. Then add the black bean sauce, and stir in half the soy sauce and the juice of half a lime. Keep moving and then taste and season with black pepper.

Remove the pan from the heat, pop everything to a bowl and cover with tin foil.

Give the pan a quick wipe (with a ball of kitchen paper) and put back on the heat. Add the rest of the groundnut oil and swirl it around. Crack in your egg and the rest of the soy sauce and keep stirring (the egg cooks veeeeeeery quickly!!). Once it’s scrambled, stir in your chilled rice, scraping the sides and the bottom of the pan as you go. Keep mixing for a few minutes until the rice is steaming hot, then taste and season with a small splash of soy sauce, if needed.

Finally, divide the rice between two bowls and spoon over the meat and black bean sauce and sprinkle over the coriander leaves. Serve with wedges of lime!